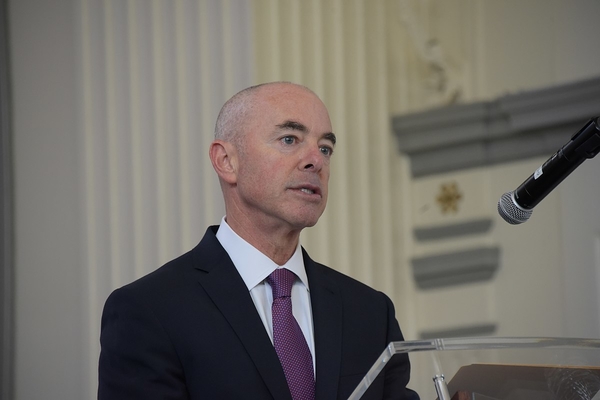 The Department of Homeland Security Alejandro Mayorkas told an audience of left-wing lawyers the dignity of foreign migrants “foremost in our efforts.”

In his speech to the 2021 American Constitutional Society (ACS), Mayorkas described his “identity” as a champion for migrants:

The element of dignity [and] the rule of law. Those are two foundational guideposts as I seek to lead an agency, as we, as servants of the law, seek to bring justice in whatever we do. And here in the Department of Homeland Security, I think that must guide everything that we do.

He portrayed himself as a guardian angle for an unknown number wanting to migrate into the U.S., saying:

I want to read to you, as my final words, a note that we received at U.S. Citizenship and Immigration Services, to speak of the impact on an individual to communicate what we can do to ensure that throughout our actions, we recognize and respect the dignity of every individual, and what it means to administer the rule of law in the best traditions of our country, and in adherence to the principles of our Constitution.

“Dear Mrs. Officer, I want to inform you that I received a letter of approval in regards for my application in this great humanitarian country. Madam, I want to thank you, and thank this great nation, for giving me a chance to find a refuge for my life  … May God bless you for being my guardian angel. And may God bless America for saving me.”

Mayorkas said in his final sentence, “The benefit given to the migrant represents “the fundamental principle of dignity and the rule of law as an instrument deliberate.”

There was no mention of any plans to use that “instrument deliberate” to raise the dignity of Americans. Instead, millions of Americans have lost dignity as the endless flood of migrants compete for American jobs, homes, and opportunities.

In April, roughly 90,000 additional migrants were allowed into the U.S. by Mayorkas, along with the annual inflow of nearly 1 million legal immigrants and roughly 2 million visa workers.

The New York Times reported on June 5 how a worker shortage and President Donald Trump’s “tight labor market” of 2019 is forcing companies to provide better pay and conditions to Americans. “The relationship between American businesses and their employees is undergoing a profound shift: For the first time in a generation, workers are gaining the upper hand,” the report said, adding “In effect, an entire generation of managers that came of age in an era of abundant workers is being forced to learn how to operate amid labor scarcity.”

As of yet, GOP legislators have not questioned Mayorkas’s policy’s economic impact on American voters.

In his speech, Mayorkas identifies himself with migrants, not Americans.

He described the shock he felt when visiting a migrant camp in Kenya around 2010 that was filled with many thousands of destitute migrants from the chaotically diverse country of Somalia. He continued:

And I returned to the States asking a lot of fundamental questions, certainly about whether we could define ourselves as a civilized world or not, but also asking questions about myself … and the question of identity became much more profoundly important to me as an individual, as a son, as a brother, and as a father, and husband. But it also became very important to me as a leader of an organization. And the issue of identity became the central question when we were wrestling with policy issues.

When we consider a particular policy question before us, doesn’t the answer help define our identity? Who we are, and more importantly, who we want to be?

But the truth is, Mayorkas took office after swearing:

I do solemnly swear that I will support and defend the Constitution of the United States against all enemies, foreign and domestic; that I will bear true faith and allegiance to the same; that I take this obligation freely, without any mental reservation or purpose of evasion; and that I will well and faithfully discharge the duties of the office on which I am about to enter: So help me God.

Mayorkas used his speech to list how his offer of dignity to foreign migrants has changed the enforcement of the migration rules that exist to protect Americans’ rights to their society and their national labor market.

Illegal migrants are described as “illegal aliens” in federal law. However, Mayrokis issued a directive saying, “we should refer to those individuals as “non-citizens” to reflect that their lawful presence or their unlawful presence in the United States does not define their dignity as individuals.”

Mayorkas made little or no distinction between Americans and foreigners throughout his speech or between legal immigrants and illegal migrants. He even suggested that the agency is intended to serve migrants — not the 330 million Americans who need secure borders and protect labor rights:

In the government, we have the privilege of seeking to make systemic change, to bring dignity, or I should say, to reflect in what we do, reflect the dignity of the people we serve on a very impactful and systemic basis. But we cannot forget that the rule of law, that the law as an instrument of delivering dignity, can bring that to the single individual. And we cannot understate the importance of doing so. And I think that sometimes the impact on one individual can reverberate throughout an entire institution and bring systemic change.

The emphasis on “people we serve” was added by the DHS transcript of the speech.