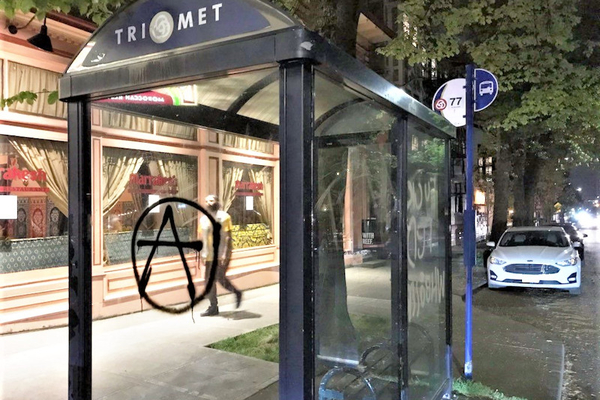 Portland Police Bureau officials declared an “Autonomous Demonstration” a riot after a business was vandalized by protestors who forcefully entered a busy restaurant.

The Portland Police Bureau said the planned protest had been billed as an “autonomous demonstration.” It started around 9 p.m. PT with around 75 protesters dressed all in black who started vandalizing property approximately 15 minutes after they began marching from a park near the city’s downtown.

A social media post called for an “Autonomous Demonstration” at Couch Park in Portland, Oregon, on Friday night. The post called for demonstrators to “Bloc Up” — a call to wear black bloc to “make it difficult for police to identify lawbreakers,” police officials stated.

Police declared the incident to be a riot and ordered protesters to leave, Fox 12 Portland’s Drew Marine tweeted.

One resident was attacked while attempting to film their march by throwing a rock through the homeowner’s window, the police stated.

The rioter’s anger appeared to target Mayor Ted Wheeler, who extended the city’s state of emergency following the conviction of Derek Chauvin.

“Tonight, the anarchists have called for more destruction,” Wheeler said in a news conference Friday afternoon announcing the emergency extension, according to KGW-TV in Portland. “I’ve directed the police bureau to arrest and engage illegal activity whenever they can safely do so.”

Demonstrators shouted “F***K Ted Wheeler” as they marched through the streets.

Reports state officers made two arrests – Jacob A. Camello, 29, and Crystal M. Miranda, 29. Both face charges of Criminal Mischief in the First Degree. Camello reportedly had items in his possession to facilitate criminal mischief.