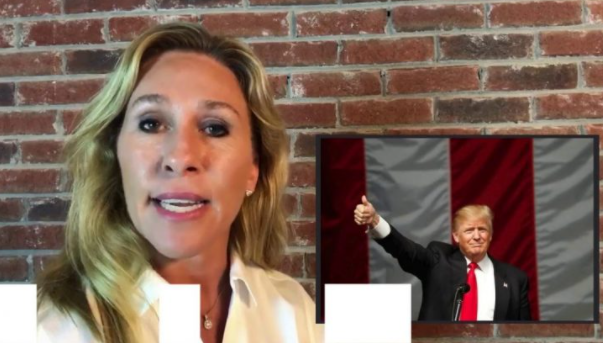 Gettr, a pro-Trump social media rival to Twitter, announced the news and posted Greene’s rebuttal on their platform:

🚨 #BREAKING : Congresswoman #MarjorieTaylorGreene has been suspended from Twitter. See her response on #GETTR here 👇https://t.co/Rw0H2rDi79 #marjorie

Greene wrote in a Gettr post that she believes she was banned by Twitter for referencing VAERS statistics about vaccine injuries caused by the COVID-19 jab.

“When Maxine Waters can go to the streets and threaten violence on Twitter, Kamala and Ilhan can bail out rioters on Twitter, and Chief spokesman for terrorist IRGC can tweet mourning Soleimani but I get suspended for tweeting VAERS statistics, Twitter is an enemy to America and can’t handle the truth,” Greene wrote. “That’s fine, I’ll show America we don’t need them and it’s time to defeat our enemies.”

Big League Politics has reported on Twitter increasing their Orwellian censorship regime since former CEO Jack Dorsey was forced out of his position and replaced with an anti-American foreigner:

Twitter is banning all “private media” from being shared on the platform without consent. This policy is being sold as a way to protect the privacy of its users, but knowing how the tech giants operate, it will likely be used to protect left-wing scum and not apply to right-wing dissidents.

“There are growing concerns about the misuse of media and information that is not available elsewhere online as a tool to harass, intimidate, and reveal the identities of individuals. Sharing personal media, such as images or videos, can potentially violate a person’s privacy, and may lead to emotional or physical harm,” Twitter wrote in their announcement of their new policy.

“The misuse of private media can affect everyone, but can have a disproportionate effect on women, activists, dissidents, and members of minority communities. When we receive a report that a Tweet contains unauthorized private media, we will now take action in line with our range of enforcement options,” they added.

“Feeling safe on Twitter is different for everyone, and our teams are constantly working to understand and address these needs. We know our work will never be done, and we will continue to invest in making our product and policies more robust and transparent to continue to earn the trust of the people using our service,” the tech monolith wrote.

On Monday, it was announced that Agrawal would be succeeding long-time CEO Jack Dorsey in his position. It should come as no surprise that Agrawal is a far-left zealot who has no respect for the 1st Amendment of the U.S. Constitution.“

Greene’s banishment will only hasten the demise of the social media monopolies. Big Tech is becoming more restrictive and insular while their competitors are growing and become more viable with each passing day.