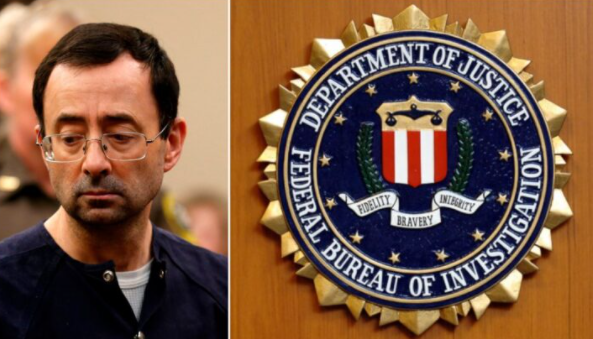 (Big League Politics) – A Department of Justice (DOJ) investigation has discovered that pedophile Larry Nassar, the infamous former USA Gymnastics team doctor who molested the girls he was supposed to be treating, was helped by FBI incompetence.

Department of Justice (DOJ) Inspector General Michael E. Horowitz announced this week that FBI agents in Indianapolis ignored the victims and then lied in an attempt to cover up their tracks after the fact.

“The DOJ Office of the Inspector General (OIG) found that senior officials in the FBI Indianapolis Field Office failed to respond to allegations of sexual abuse of athletes by former USA Gymnastics physician Lawrence Gerard Nassar with the urgency that the allegations required,” the DOJ wrote in a press release.

“We also found that the FBI Indianapolis Field Office made fundamental errors when it did respond to the allegations, failed to notify the appropriate FBI field office (the Lansing Resident Agency) or state or local authorities of the allegations, and failed to take other steps to mitigate the ongoing threat posed by Nassar,” they added.

Horowitz has confirmed that the FBI agents in Indianapolis did nothing to prevent Nassar from continuing to victimize young girls for over a year. They learned of the allegations in July 2015, and Nassar continued to see patients until Sept. 2016.

“The OIG further found that, when the FBI’s handling of the Nassar matter came under scrutiny from the public, Congress, the media, and FBI headquarters in 2017 and 2018, Indianapolis Field Office officials did not take responsibility for their failures. Instead, they provided incomplete and inaccurate information to make it appear that they had been diligent in responding to the sexual abuse allegations,” the press release states.

Big League Politics has reported on other instances where the FBI appeared to be protecting predators as they targeted children:

“The pro-family group MassResistance, which specializes in exposing pedophiles who are organizing drag queen story hour events, is getting harassed by the Federal Bureau of Investigation (FBI).

The group has published many controversial posts about the Jan. 6 U.S. Capitol demonstration from their website. They believe that this is why their leaders are being targeted by the feds who are desperate to make examples in the wake of that event.

“It is not an exaggeration to say that this so-called “law enforcement” organization has become reminiscent of the East German Stasi and the Soviet Union’s KGB. A visit from the FBI can be the beginning of a nightmare for a citizen,” MassResistance wrote.

That nightmare may have started for the group’s national organization director Arthur Schaper, who recently received a visit from two FBI special agents at his suburban Los Angeles, Calif. apartment.

“We’re following up on leads from DC. We’re just curious if you went to DC or if you knew anybody who had gone to DC, and if you’d be willing to talk to us about any of that,” an agent reportedly told Schaper.

“I did not go to DC. But honestly, I think this is a massive abuse of power which you guys are doing. It’s disgusting. I want to have a lawyer with me before I talk to you. You guys are violating the Constitution,” Schaper responded.

They refused to tell Schaper how they were able to get into the apartment complex, and this is when he told the FBI agents to leave. They eventually complied with his request. MassResistance president Brian Camenker reached out to FBI offices in Boston and Los Angeles after the fact but received no response.

“It’s certainly frightening that the Biden administration has militarized the FBI and much of the federal government against conservative Americans. But as free people, we must stand up to it. We cannot back down or be intimidated… This is not the America we once knew. But we are doing our best to bring our country back,” MassResistance wrote to conclude their report on what occurred.”

The FBI and the rest of the deep state is focusing on terrorizing patriots and letting child predators get away with their crimes. They should be disbanded immediately for the good of the nation.