The photos show agents being trained for a variety of deadly force exercises at field offices across the country.

The training exercises include the use of weapons, forced building entry, defensive tactics, and others.

The IRS is now seeking agents who are “willing to use deadly force,” according to a recent job posting.

Suitable applicants must be “willing and able to participate in arrests, execution of search warrants, and other dangerous assignments.”

Requirements include working min “50 hours per week, which may include irregular hours, and be on-call 24/7, including holidays and weekends” and “Carry a firearm and be willing to use deadly force, if necessary.”https://t.co/uvwbrAkIit pic.twitter.com/z0aVX6uoMr

The “Major Duties” listed in the job posting are:

Adhere to the highest standards of conduct, especially in maintaining honesty and integrity.
Work a minimum of 50 hours per week, which may include irregular hours, and be on-call 24/7, including holidays and weekends.
Maintain a level of fitness necessary to effectively respond to life-threatening situations on the job.
Carry a firearm and be willing to use deadly force, if necessary.
Be willing and able to participate in arrests, execution of search warrants, and other dangerous assignments.
There are 300 openings for the “dangerous” jobs nationwide, as listed on USAJobs.gov.

Following reports of the job listing, an internal report from the IRS has now emerged online that includes images that appear to show heavily-armed agents practicing an assault on a suburban home.

IRS:CI SPECIAL AGENTS are among the most highly trained financial investigators in the world. They begin their training at the National Criminal Investigation Training Academy (NCITA). NCITA is located at the Federal Law Enforcement Training Center (FLETC) in Brunswick, Georgia.

In addition to SAIT, NCITA assists in providing advanced training to special agents in use of force, firearms instruction, defensive tactics, and building entry.

The following images of IRS training exercises were included in the report: 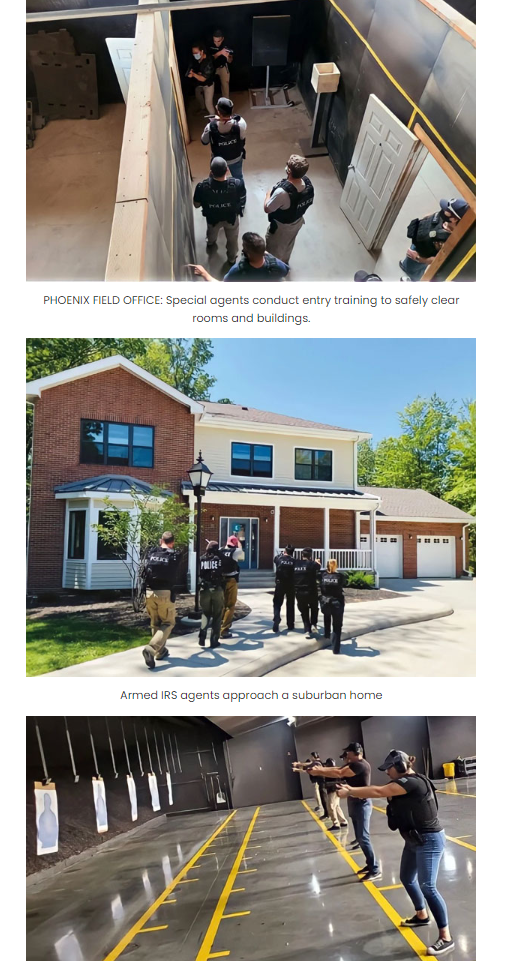 Last Sunday, the Senate passed the Democrats’ sweeping economic package that would allocate billions of taxpayer dollars to facilitate the expansion of the Internal Revenue Service’s workforce.

The IRS will receive $80 billion after the bill lands on Democrat President Joe Biden’s desk.

The funding would mark a 600 percent increase from 2021 when the bureau received $12.6 billion.

The reconciliation package would also double the current IRS workforce by hiring an additional 87,000 employees to the bureau’s staff of 78,661 employees.

At 165,661 employees, the IRS is poised to become larger than the Pentagon, State Department, FBI, and Border Patrol combined, whose total employees are 158,779.

BREAKING: Soros Officially Declared Most DANGEROUS Person In The World

BREAKING: Soros Officially Declared Most DANGEROUS Person In The World