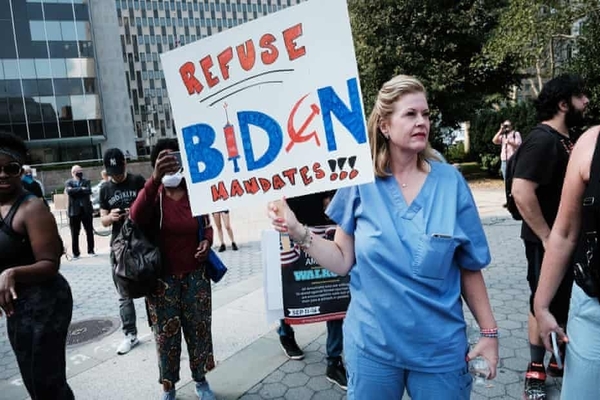 President Biden’s White House encourages big businesses to go along with his vaccine mandate despite the federal court of appeals placing a temporary halt on his order.

“People should not wait,” White House Deputy Press Secretary Karine Jean-Pierre told reporters on Monday. “They should continue to move forward and make sure they’re getting their workplace vaccinated.”

President Biden announced that the Department of Labor’s Occupational Safety and Health Administration (OSHA) would mandate private companies employing more than 100 people to mandate vaccines or require weekly testing back in September. Nearly two months went by before the president released the details of his plan, set to take effect in January of 2022. Those companies in violation of the mandate could face fines up to $136,532.

However, the plan hit a brick wall on Saturday when the U.S. Court of Appeals for the Fifth Circuit Court issued a temporary stay blocking the mandate while considering a permanent injunction.

The three-judge panel ruling resulted from a stay sought by Texas, Utah, Mississippi, and South Carolina and several businesses opposing Biden’s plan. The petition filed by states and companies goes directly to a federal appeals court instead of a one-judge federal district trial court.

“Because the petitions give cause to believe there are grave statutory and constitutional issues with the Mandate, the Mandate is hereby stayed pending further action by this court,” the judges wrote.

On Monday, the Biden administration urged the court to lift the temporary suspension, claiming the pause “would likely cost dozens or even hundreds of lives per day.”

Twenty-six Republican Attorney General’s have filed a lawsuit against the Biden administration in five different appeals courts. David Vladeck, a professor of law at Georgetown University, told CNBC that the suits have a “high probability” of reaching the Supreme Court, which may or not rule in the administration’s favor.

“There are justices on the court who want to rein in the administrative state, and this is a case in which those concerns are likely to come to the fore,” Vladeck told CNBC.

On Monday, the Truckload Carriers Association (TCA) warned that the rule could further maximize the supply-chain crisis if a fraction of their drivers were fired or quit due to the mandate. The economic consequences could be disastrous if the Biden administration is allowed to implement the vaccine mandate.

“TCA repeatedly called on the Administration to heed our warnings regarding this mandate’s impact on the already constrained supply chain, yet they chose to proceed with a disastrous mandate which will undoubtedly ensure the trucking industry loses a substantial number of drivers,” the group said in a statement.