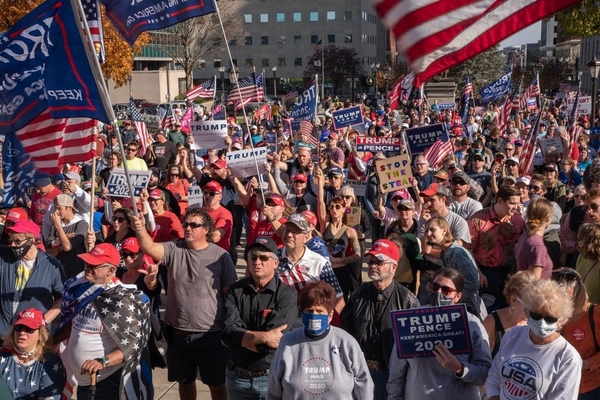 During a press conference in Europe on Monday, President Biden calls Trump supporters a “significant minority” of Americans.

The president spoke of Trump and his supporters during a press conference day after NATO summit meetings with the world leaders.

A reporter asked Biden how American’s allies could trust his statement that “America was back” after Trump’s presidency.

“What I’m saying to them is, ‘Watch me,’” Biden replied, adding he was trusting that world leaders believed, “that I mean what I say, and they believe that I keep my commitments when I say it.”

Biden believes that the United States is turning away from the “phony populism” inflamed with Trump’s presidency.

“I think this is passing. I don’t mean easily passing,” he said. “That’s why it’s so important that I succeed in my agenda.”

Biden expressed hopes that “a lot of Republicans, particularly younger Republicans,s” would join in a coalition of political leadership.

The Capitol Hill riots on January 6th was cited as a shock to democracies worldwide, but he is reassured about America’s character overall.

“I think it is a shock and surprise that what’s happened in terms of the consequence of President Trump’s phony populism has happened,” he said.

Biden expressed his disappointment in Republican’s refusal to vote in support of an investigation of the Capitol Hill riots and failure to challenge the hold Trump has on their party.

“It is disappointing that so many of my Republican colleagues in the Senate — who I know, know better — have been reluctant to take on, for example, an investigation because they’re worried about being primaried,” he said.