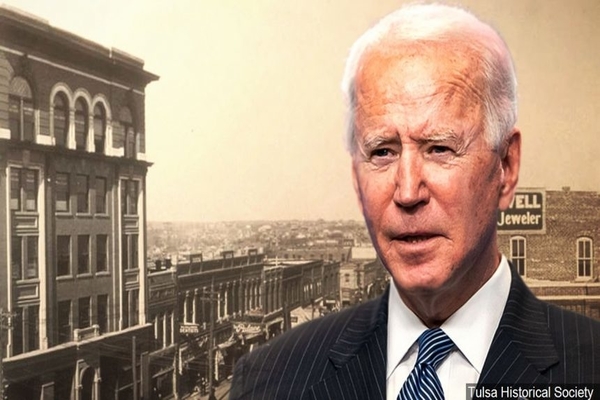 President Biden said terrorism from white supremacy was “the most lethal threat” facing the United States.

During a speech in Tulsa on the 100th anniversary of the race massacre in the Greenwood neighborhood, President Biden spoke about the threat of white supremacy.

“I thought after you guys pushed through the Voting Rights Act and the Civil Rights Act, I thought we had made tremendous progress, and I was so proud to be just a little part of it,” Biden said to Reverend Jesse Jackson, who was sitting in the audience. “But what I didn’t realize is that hate is never defeated; it only hides. It hides. And given a little bit of oxygen by its readers, it comes out from under the rock as if it never went away.”

“According to the intelligence community, terrorism from white supremacy is the most lethal threat to the homeland today,” Biden said. “Not ISIS. Not Al Qaeda. White supremacists.”

Biden was likely referring to the statement of September 2020 by U.S. Homeland Security Secretary Chad Wolf, who told members of Congress that white supremacy was “the most persistent and lethal threat” to the United States. DHS released a report showing that white supremacy accounted for more fatal attacks than any other domestic extremist groups since 2018.

Biden revisited the massacre of the black community in Tulsa to show the long history of white supremacists in the country — comparing it to the clash between the protesters in Charlottesville.

“What happened in Greenwood was an act of hate and domestic terrorism, with a through-line that exists today,” he said. “Just close your eyes and remember what you saw in Charlottesville four years ago on television.”