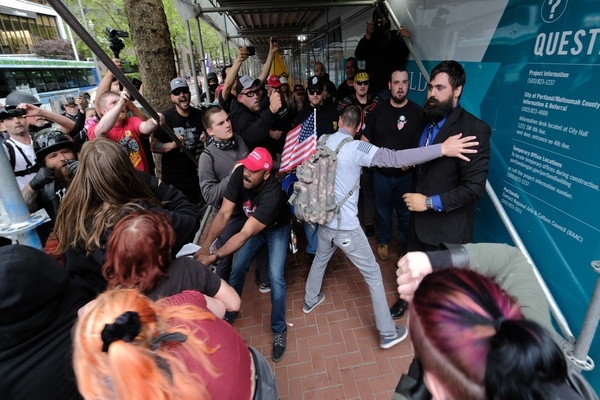 Dozens of ANTIFIA – related cases in Portland quietly dismissed despite the group waging war on the city for months.

Federal court records show 31 of the 90 cases have been dismissed by the Department of Justice.  Felony cases of assaulting federal officers are linked with four of the individuals who had charges dropped. They are free to participate in the revolution against civil society again.

Half of the dropped charges were “dismissed with prejudice,” meaning they cannot be brought back to court.  Former federal prosecutors told KGW8 that these dismissals are incredibly rare.  This leads one to believe that the feds look the other way for ANTIFA shock troops as they were influential in hurting President Donald Trump last year.

With broken promises by the feds to the people of Portland,  terrorists would be held accountable for waging war against the city.

“Make no mistake: those who commit violence in the name of protest will be investigated, arrested, prosecuted, and face prison time,” former U.S. Attorney for Oregon Billy Williams said in a Sept. 25, 2020 press release.

The lying to the public and letting potential domestic terrorists free to commit more violence is defended by Williams.

“Each case was analyzed for the evidence that we had at the time,” said Williams. “Careful decisions were made on whether or not someone should be charged based on the evidence.”

“Everything is case-specific when you go about these cases being processed through the system,” continued Williams. “I’ve never made a decision in my career based upon political pressure or institutional pressure.”

Big League Politics reports the FBI serving as a public relations agency for Antifa as they punish the American public:

The Federal Bureau of Investigation (FBI) is claiming there is “no intelligence,”  indicating that ANTIFA had a role in fomenting riots that have gripped the country.

This directly contradicts President Donald Trump and Attorney General Bill Barr, who immediately assigned the blame toward ANTIFA for the violence that is happening nationwide.

“The violence instigated and carried out by ANTIFA and other similar groups in connection with the rioting is domestic terrorism and will be treated accordingly,” Barr said.

Meanwhile, Trump took to Twitter to announce that “the United States of America will be designating ANTIFA as a Terrorist Organization.”

The FBI’s Washington D.C. field office reportedly claims that they have “no intelligence indicating ANTIFA involvement/presence” in the riots. They also claim that “CHS [Confidential Human Source] canvassing, open-source open/social media partner engagement, and liaison” absolve ANTIFA from any blame.

However, the FBI is assigning blame to right-wingers for mean words allegedly made in social media groups. They claim individuals on social media “called for far-right provocateurs to attack federal agents” and “use automatic weapons against protesters.” The DHS also claims that far-right social media posts “incited followers to engage in violence and start the ‘boogaloo’ — a term used by some violent extremists to refer to the start of a second Civil War — by shooting in a crowd.”

Big Tech is working with the deep state to cover for ANTIFA terrorists and spread the conspiracy theory that white nationalists are somehow responsible for the violence.

It has become more evident that ANTIFA is working with the FBI clearing the path for globalism and crushing the Bill of Rights and Constitution.