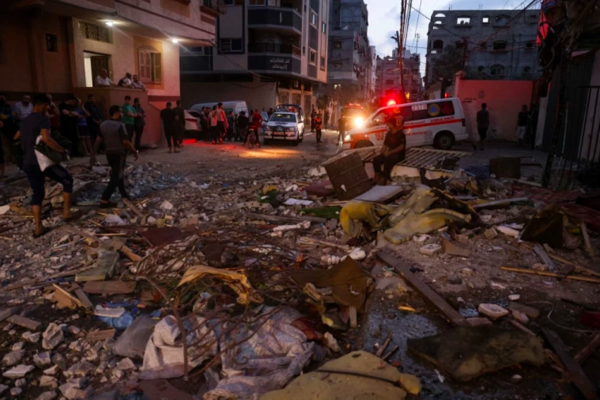 Sirens sounded more than one time as loud booms could be heard inside bomb shelters. Parents tried to comfort scared children during the rocket attacks, far more common in southern border towns of Israel.

The Times of Israel reported:

“Now, in fulfillment of our promise, the Al-Qassam Brigades has launched the largest missile strike on Tel Aviv and its environs, with 130 missiles, in response to the enemy’s targeting of civilian high-rises,” Hamas says in a statement on its Telegram.

Hamas appeared to be referring to an airstrike by the Israeli Defense Forces (IDF) that demolished an apartment building in Gaza; several warnings were given for occupants to leave.

Israel has confirmed another strike against terrorists in an apartment building in Gaza.

Hamas hides its fighters and fires rockets in heavily populated areas of Gaza.

There are unconfirmed reports of Arab residents of Jaffa – a mixed Arab-Jewish city near Tel Aviv- celebrating at the air raid sirens.

While in bomb shelters, local internet access had been lost during the riots. Information was exchanged by residents by ordinary cell phone, reporting the sky was “on fire” as Iron Dome missiles batteries attempted to intercept the incoming missiles.

The Times of Israel reported that a woman was killed in the town of Rishon Lezion. Rockets also fell in residential areas in Tel Aviv and nearby Givatayim.

Hamas fired hundreds of rockets at Israel on Monday evening, many of which were intercepted, though not all. Two women were killed in the Israeli town of Ashkelon. Israel responded with over 100 targeted attacks on terrorist targets in the Gaza Strip.