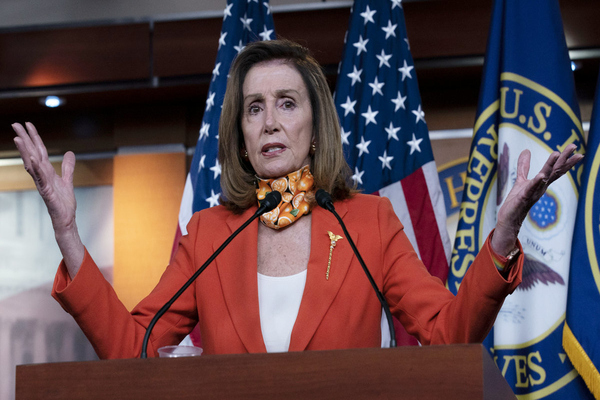 House Speaker Nancy Pelosi is turning the House of Representatives into a potential coronavirus hotspot, Democrats were allowed to break quarantine to vote in the speakership election as she faces a tough battle for another term in control of the chamber.

According to congressional reporter John Bresnahan, at least three members are breaking quarantine to attend swearing-in ceremonies and the all-important speakership election Sunday. Two of them are Democrats and one is Republican. After testing positive six days ago for the deadly virus Rep. Gwen Morre (D-FL) attended to vote backing Pelosi.

Pelosi was ripped by a senior GOP congressional aid, calling the decision to bring these coronavirus risks into the house just to secure a second term as speaker a “speakership election super spreader event.”

“Nancy Pelosi’s grip on the speakership is so tenuous that she is forcing members exposed to coronavirus to break quarantine and come to the Capitol to vote for her and protect her political power,” the senior GOP aide told Breitbart News.

It is suspected that House Gop leader Kevin McCarthy is likely to criticize Pelosi as well for allowing quarantine to be broken.

The speaker’s office provided a statement from the attending physician of U.S. Congress, Dr. Brian Monahan to Breitbart News in response to an inquiry on this matter.

It read in part:

Upon the direction of the Office of Attending Physician and the House Sergeant at Arms, a secure enclosure has been erected in Gallery 4 of the House Chamber to allow Members who are in quarantine status to fulfill their Constitutional duties,” Monahan said in the statement. “Under federal guidelines from the Centers for Disease Control (CDC) and the Cybersecurity and Infrastructure Security Agency (CISA), essential workers, in order to ensure continuity of operations of essential functions, are permitted to continue work following potential exposure to COVID-19 [Chinese coronavirus] provided they remain asymptomatic and additional precautions are implemented to protect them and the community. The highest possible safeguards have been implemented including separate, enhanced ventilation in this space and separate holding facilities for any Members utilizing Gallery 4. This step will only be necessary until proxy voting resumes as an option for impacted Members.

in addition, a U.S. Capitol official added these people are in “quarantine status,” a condition of which is a recent negative coronavirus test.

“The Members using this facility are two Democrats and one Republican all at the direction of the physician,” the U.S. Capitol official said.

Pelosi’s decision to put members of Congress at risk comes after Rep.-elect Luke Letlow (R-LA) died of a heart attack during a surgical procedure while hospitalized for coronavirus last week.

Pelosi faces a tough vote to get re-elected as speaker. She needs those present and voting in person to win a majority. The Democrat majority has decreased to just a handful of seats.

It is unclear on Sunday exactly how many votes Pelosi must secure to sin another term as speaker.

But when the House is full, only five or six members — think the “squad” alone, just Reps. Alexandria Ocasio-Cortez (D-NY), Ilhan Omar (D-MN), Rashida Tlaib (D-MI), Ayanna Pressley (D-MA), Cori Bush (D-MO), and Jamaal Bowman (D-NY), or from the other side of the Democrat conference members like Spanberger — can stop Pelosi from passing legislation along party lines alone by banding together to vote against a bill or a rule. Similar logic applies to a speakership vote, this puts the Democrat leader in a tough position.