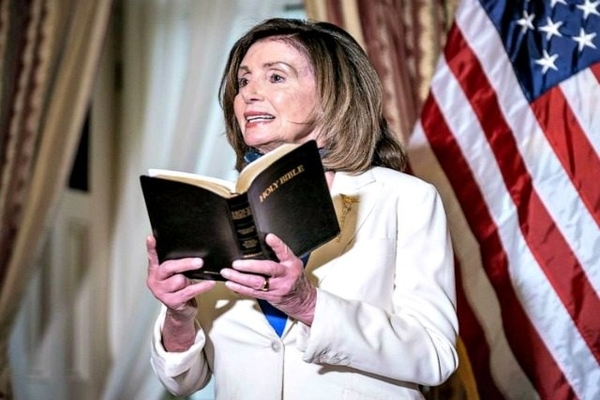 House Speaker Nancy Pelosi (D-CA), in light of the controversy over the fact she supports legalized abortion she can use her “own judgment” regarding her decision to receive Holy Communion.

CNSNews.com noted Pelosi’s response to a reporter’s question that “the U.S. archbishops and the Bishops’ Conference … doesn’t want to … allow you to receive communion” —

“No, they don’t,” Pelosi interjected.

She was asked for her reaction to the Catholic bishop’s consideration of a document regarding politicians claiming to be Catholic, but support abortion and euthanasia while working to pass legislation that promotes them, should receive Holy Communion; Pelosi stated, “I think I can use my own judgment on that.”

“But, I’m pleased with what the Vatican put out on that subject,” she added. “Did you read that?”

“It will be up to the individual priests?” the reporter asked.

“No,” Pelosi answered. “It basically said, ‘Don’t be divisive on the subject.’”

The U.S. Conference of Catholic Bishops will convene for a national meeting next month, with plans to vote on drafting guidelines for Communion. Some bishops have been pressing for President Biden and other public figures who support abortion to be excluded from the sacrament.

Pelosi’s hometown bishop, Archbishop Salvatore Cordileone, has said that those who support abortion should not come forward for Communion; he aimed at “public figures,” threatening exclusion from the sacrament.

“If you find that you are unwilling or unable to abandon your advocacy for abortion, you should not come forward to receive Holy Communion,” Cordileone said in a pastoral letter released earlier this month.

He added: “Please stop pretending that advocating for or practicing a grave moral evil – one that snuffs out an innocent human life, one that denies a fundamental human right – is somehow compatible with the Catholic faith.”

“It is not. Please return home to the fullness of your Catholic faith. We await you with open arms to welcome you back.”

Ladaria response to Gomez’s previous letter, informing the Vatican of the bishop’s intention to draft a document on public figures who support legislation considered evil to the Catholic Church.

The document states that, regarding laws permitting or promoting abortion or euthanasia, “it is impossible” for Catholic politicians “to promote such laws or to vote for them.”

The Vatican prefect recommended a memorandum written in 2004 by then-Cardinal Joseph Ratzinger, who subsequently became Pope Benedict XVI, which, he noted, provides “general principles on the worthy reception of Holy Communion” and can be helpful “to assist local ordinaries in the United States in their dealings with Catholic pro-choice politicians.”

“Not all moral issues have the same moral weight as abortion and euthanasia,” Ratzinger wrote in his letter. “The Church teaches that abortion or euthanasia is a grave sin.”

Christians have a “grave obligation of conscience not to cooperate formally in practices which, even if permitted by civil legislation, are contrary to God’s law. Indeed, from the moral standpoint, it is never licit to cooperate formally in evil. […] This cooperation can never be justified either by invoking respect for the freedom of others or by appealing to the fact that civil law permits it or requires it.”

“Apart from an individual’s judgment about his worthiness to present himself to receive the Holy Eucharist, the minister of Holy Communion may find himself in the situation where he must refuse to distribute Holy Communion to someone,” Ratzinger continued.

Recommendations were given on how a pastor should act when faced with a Catholic politician who supports abortion and\or euthanasia, were given by Ratzinger:

Regarding the grave sin of abortion or euthanasia, when a person’s formal cooperation becomes manifest (understood, in the case of a Catholic politician, as his consistently campaigning and voting for permissive abortion and euthanasia laws), his Pastor should meet with him, instructing him about the Church’s teaching, informing him that he is not to present himself for Holy Communion until he brings to an end the objective situation of sin, and warning him that he will otherwise be denied the Eucharist.

“When ‘these precautionary measures have not had their effect or in which they were not possible,’ and the person in question, with obstinate persistence, still presents himself to receive the Holy Eucharist, ‘the minister of Holy Communion must refuse to distribute it,’” Ratzinger said.

The likely part of the letter Pelosi attended to during her press briefing appears to be the risk exists the debate could “become a source of discord rather than unity within the episcopate and the larger church in the United States,”  Ladaria stated.