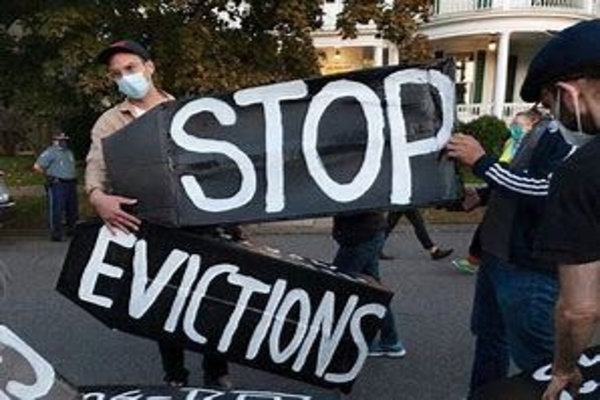 President Biden and Democrats were criticized for failing to extend the eviction moratorium, the temporary protective measure for renters impacted by the coronavirus.

“You are absolutely correct in that the House and House leadership had the opportunity to vote to extend the moratorium,” Rep. Alexandria Ocasio-Cortez (D-NY) said Sunday, “And there were many, and there was, frankly, a handful of conservative Democrats in the House that threatened to get on planes rather than hold this vote.”

“And we have to really just call a spade a spade. We cannot in good faith blame the Republican Party when House Democrats have a majority,” she added. “The House should reconvene and call this vote and extend the moratorium.”

Rep. Maxine Waters (D-CA) stated, “We thought that the White House was in charge,” as she blamed Biden for the lapse.

“The president should have moved on it,” Waters said.

On Monday, Rep. Cory Bush (D-MO) said, “we haven’t fixed the housing crisis that we already have. How do we put more people on the street and then in a deadly global pandemic that is surging?”

“I’m exhausted. I’m sleep deprived. My body is physically hurting, but it’s nothing in comparison to what will happen to those who are actually put out on the street and have to stay there,” she continued.

In June, the Associated Press reported the Supreme Court allowed “the broad eviction ban to continue through the end of July. One of those in the majority, Justice Brett Kavanaugh, made clear he would block any additional extensions unless there was ‘clear and specific congressional authorization.’”

However, Biden placed the extension of the date back to the responsibility of Congress.

Breitbart News reported Bush, who struggled with homelessness in her past, slept outside the U.S. Capitol overnight in protest, along with Reps. Ayanna Pressley (D-MA), and Ilhan Omar (D-MN).

“Many of my Democratic colleagues chose to go on vacation early today rather than staying to vote to keep people in their homes,” Bush tweeted on Friday. “I’ll be sleeping outside the Capitol tonight. We’ve still got work to do.”