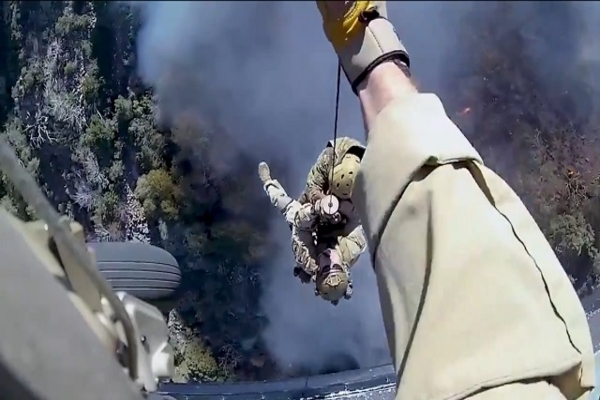 What did U.S. Customs and Border Protection’s Air and Marine Operations mean by this tweet?

On the afternoon of March 30, the AMO Tucson Air Branch received a call from the Arizona Air Coordination Center requesting a hoist capable UH-60 Black Hawk for a migrant with a possible broken leg at over 6,000 feet in elevation. Once on the scene, the Black Hawk crew spotted a signal fire that the man had started and lowered an AMO Aviation Enforcement Agent Emergency Medical Technician to the mountains below. The agent performed an assessment of the situation on the ground and stabilized the man for hoist up to the hovering helicopter. Back in the helicopter, the AMO and USBP EMTs stabilized the man, and the Black Hawk crew transported the man to the Three Points fire department for further treatment.

“Frequently, smugglers will send migrants across the border in small groups to overwhelm CBP resources in the area,” said Deputy Director, Tucson Air Branch, Hunter Robinson. “Unfortunately, these routes can be extremely treacherous, and this individual was very fortunate he survived, and we could use AMO resources to get him to safety.”

Not clear what happed with the forest fire that was started.

What an amazing rescue, but did anyone really sign up to CBP to act as babysitters for illegal aliens?

A majority of these illegal aliens would have remained in Mexico or Central America if we still had Trump’s stricter policies on immigration.

Biden literally opened the borders to the “surge.”

Billions of dollars are now spent rescuing illegals with Black Hawk helicopters.  Tens of thousands of children are being babysat by CBP, while foster kids are being kicked out of homes to make room for illegals.