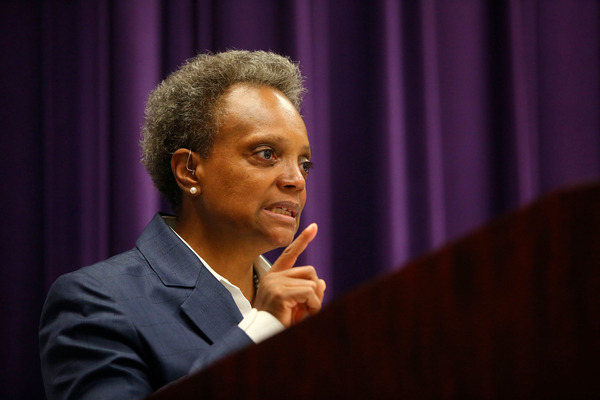 Across Chicago, Thrity-two people were shot, three dead, Friday into Sunday morning, under the watch of Mayor Lori Lightfoot (D).

Just after 2 a.m, two males approached a group standing on the sidewalk in the 7500 block of South Prairie Avenue and opened fire, Chicago police said.

A 29-year-old woman was struck in the leg and abdomen and transported to the University of Chicago Medical Center, where she was pronounced dead, police said. The Cook County medical examiner’s office has not yet identified her.

According to police, nine more victims, ranging in age from 23 to 49 years old, were transported to area hospitals, all in fair or good condition.

There is no one in custody.

About 1:20 p.m., the male, whose age is unknown, was parked on the street in the 600 block of South Wells Street when someone in a passing vehicle fired shots into his vehicle, police said.

He was struck multiple times, and he was pronounced dead at Stroger Hospital, police said. He has not yet been identified.

A 20-year-old woman was killed in a shooting Friday night in Brighton Park on the Southwest Side.

She was in a vehicle with her boyfriend about 8:50 p.m. when a gunman approached them while yelling gang slogans in the 4700 block of South Rockwell Street, police said.

The woman was sitting in the passenger seat when she was struck in the neck and hand, police said.

After the shooting, her boyfriend drove off and pulled over at a Shell gas station, 4658 S California Ave. Chicago Fire Department paramedics arrived. The woman was transported to Mount Sinai Hospital and later pronounced dead, police said. She has not yet been identified.

A 14-year-old boy was wounded in an attack Saturday in West Woodlawn while playing on the sidewalk with friends; someone opened fire in the 6500 block of South Champlain Ave, the police said.

He suffered a graze wound on the neck and was transported to Comer Children’s Hospital, where his condition stabilized.

Two more teen boys were hurt in a drive-by shooting Saturday in Little Village on the Southwest Side. Two 17year old boys were in the alley around 3:25 pm, and a vehicle drove past, firing shots in the 3500 block of West Cermak Road, police said.

One boy was shot in the shoulder and was taken to Mount Sinai Hospital in good condition, police said. The other suffered a graze wound to the arm and was taken in good shape to the same hospital.

In the weekend’s first reported shooting, two men were wounded in an attack in South Shore.

At least 15 more people have been hurt in shootings since 5 p.m. Friday.