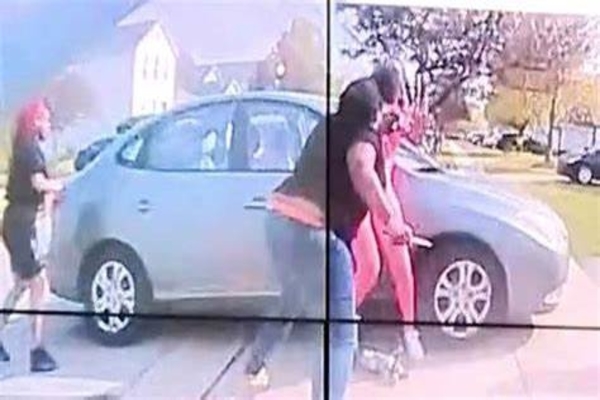 Columbus Police Department released a bodycam video showing a fight in progress and seconds leading up to the shooting.

The Columbus Division of Police released a bodycam video showing Tuesday’s shooting of a young black girl who appeared to be armed with a knife. The video shows the girl fighting with another girl as the officer opens fire.

Columbus officials quickly released the officer’s bodycam video in “an effort to be transparent” about the incident leading to the officer’s decision to shoot. It appears the officer shot to save the life of the girl in pink.

Entire press conference showing the body cam video in real-time and in slow-motion.

A knife can be seen in the girl’s hands as she appears to attempt to stab the girl in pink. The officer fires his weapon, and the girl falls to the ground; the knife is lying by her.

Columbus Mayor Andrew Ginther called it a “tragic day in the City of Columbus.”

“We know based on this footage the officer took action to protect another young girl in our community,” Ginther explained. “We think it’s critically important to share as much information as possible. We’ll continue to share footage and other information as quickly as possible.”

The Ohio Bureau of Criminal Investigation is leading the investigation into the officer-involved shooting. When the BCI has finished its investigation, “the divisional police will conduct an administrative review of the actions of this officer and all officers at the scene,” Woods said.

Police did not identify the girl but her family and Franklin County Children Services identified her as 16-year-old Ma’Khia Bryant. The family also told CBS Columbus affiliate WBNS-TV that Bryant was the one who called the police for help, saying people were fighting outside her house.