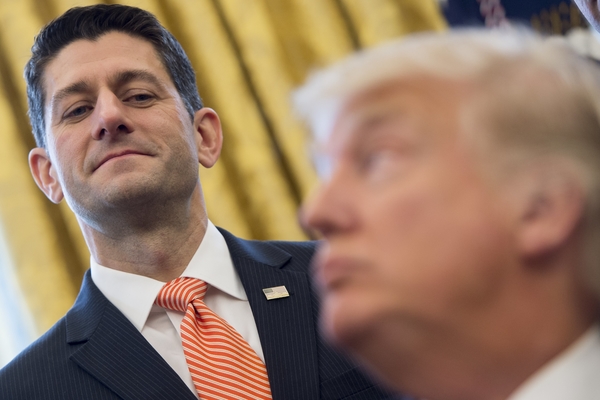 Ryan, a critic of the former President in the past, is expected to say at the Ronald Reagan Presidential Library in Simi Valley, California, that Republicans must move away from the “populist appeal of one personality” because “then we’re not going anywhere.”

“If the conservative cause depends on the populist appeal of one personality or on second-rate imitations, then we’re not going anywhere,” Ryan plans to say according to speech excerpts released to Punchbowl News.

To win back the majority in Congress, Republicans need to be agreeable and focus on “conservative principles, Ryan will predict.

“We win majorities by directing our loyalty and respect to voters and by staying faithful to the conservative principles that unite us,” he plans to say. “This was true even when the person leading our movement was as impressive, polished, and agreeable as they come.”

Ryan will argue that President Joe Biden won in 2020 by projecting himself as a “nice guy” that would move the country to the center but instead, he pushes the leftist agenda.

“These policies might have the full approval of his progressive supporters, but they break faith with the middle-of-the-road folks who made the difference for him on Election Day,” he will say.

Republicans are getting to distracted by minor grievances, Ryan will argue.

“Culture matters, yes, but our party must be defined by more than a tussle over the latest grievance or perceived slight,” he plans to say.

Ryan will also criticize President Joe Biden, claiming he is “pursuing an agenda more leftist than any president in my lifetime.”

“In 2020, the country wanted a nice guy who would move to the center and depolarize our politics. Instead, we got a nice guy pursuing an agenda more leftist than any president in my lifetime. These policies might have the full approval of his progressive supporters, but they break faith with the middle-of-the-road folks who made the difference for him on Election Day,” he is expected to say.

“We must not let them take priority over solutions – grounded in principle – to improve people’s lives,” he will say.

Ryan appears concerned about the 77,222,958 voters that Trump rallied to his side in 2020 with his populist brand of politics and his fighting style. To win again, Ryan will argue that conservatives need to return to a mild form of politics and offer principled conservative solutions.

While he was House Speaker, Paul Ryan announced his decision not to run for re-election in April 2018 before Republicans lost their majority and Nancy Pelosi seized power. In February 2021, Ryan joined Solamere Capital, a private equity firm founded by Utah Sen. Mitt Romney’s son Tagg. In August 2020, Ryan also joined Executive Network Partnering Corp., a blank-check acquisition company. He also serves on the board of Fox Corps. — the parent company of Fox News.