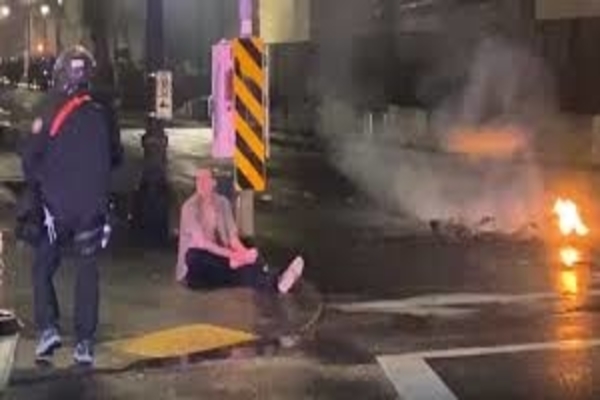 Antifa rioters threw at least two Molotov cocktail-style firebombs and launched multiple commercial-grade fireworks at Portland Police as they attempted to defend the federal courthouse and downtown business district, according to a written statement from officials. Police were also attacked with bricks, large rocks. and frozen water bottles.

Police declared the demonstration a riot and ordered the anarchist to disperse. Antifa rioters refused to comply.

The police were forced to retreat after multiple attacks as reported by independent journalist Andy Ngo.

As the police retreated, emboldened rioters threw large rocks or bricks along with more fireworks.

Brendan Gutenschwager, an independent journalist also captured the violence to police and lawlessness in the downtown business district.

The rioters set fire in the streets and attacked the federal courthouse and businesses including Starbucks and multiple financial institutions.

Portland Tribune reporter Zane Spalding reports this is the end of the line for this Starbucks. “Starbucks is leaving. They’re gone,” an employee told Spalding. “They’re not gonna come back after this… we took our fences down thinking everything was quiet. Bad Move.”

Multiple arrests have been made and the police are still compiling information, according to police officials.

“Portland Police officers citywide had to be pulled from answering emergency calls to respond,” officials wrote. “Law Enforcement officers from the Federal Protective Services and the Multnomah County Sherrif’s office also engaged the crowd and were targeted with dangerous projectiles.”