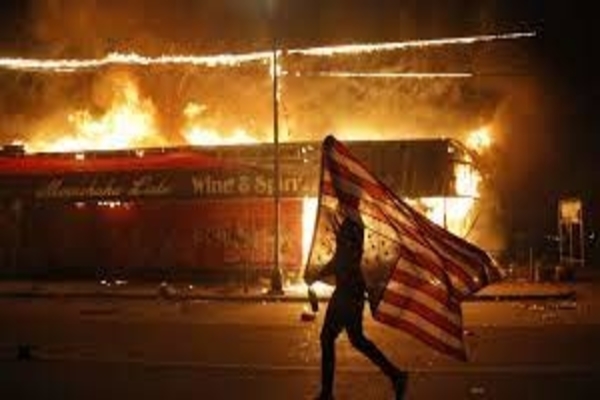 Cities will be “on fire” if Derek Chauvin is acquitted, threatened Maya Echols, a prominent activist with Black Lives Matter.

Former Minneapolis Police officer Chauvin is currently on trial for the murder of George Floyd.

“If George Floyd’s murderer is not sentenced, just know that all hell is gonna break loose. Don’t be surprised when buildings are on fire. Just saying,” Echols threatened in a since-deleted video.

Echols’ threat is one people need to take seriously.  Last year, the left-wing domestic terrorists in Black Lives Matter and Antifa rioted, burned, assaulted, and killed in dozens of American cities for months and months and months.

If Chauvin is acquitted, the left’s second round of terror will likely be more significant than the original domestic terror campaign launched by Black Lives Matter and Antifa.

The second wave of domestic terror, if there is one, will likely occur in cities full of Democrats and run by Democrats.

Democrat ran cities are plagued by riots and hate crimes and gun violence, and pollution.  Minneapolis, Democrat-run, is where Chauvin was filmed for eight minutes kneeling on George Floyd’s neck.

Have you noticed almost all allegations against a police officer using excessive force and or racism happens in Democrat-run cities?

Democrats continue to vote Democrat, in turn blaming Trump voters for their problems.  Trump supporters live in Rural America where there is no gun violence or hate crimes.

The likes of Maya Echols are destroying their neighborhoods and communities, while Trump voters enjoy Rural America.  We own guns but have no gun violence crisis, we are supposed to be the racist, but all races live together with no racial tension.  We are accused of being anti-environment; our air, water, and streets are clean.

Meantime, Rural MAGA Land, we will continue living in relative harmony, with clean water, air, and streets.  We will shake our heads of the ignorance of Democrats terrorizing Democrats.

Maya Echols is a BLM activist and a “social influencer” per The Daily Wire.  She has signed a lucrative modeling contract with IMG Worldwide.