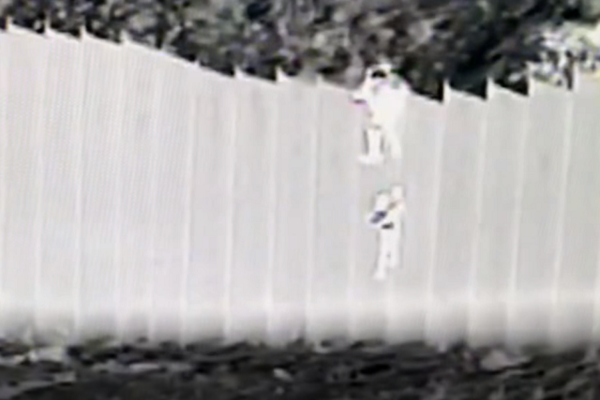 The international border wall was scaled by the human smuggler near Santa Teresa.  The wall is described as an older section of the wall about1 14-feet tall.  A second smuggler lifted the child; the child was lowered and dropped to the ground.  A second child was dropped a few seconds later.

The smuggler tossed something near the toddlers before running back to Mexico after abandoning the children.

The agents say the three-year-old and five-year-old were abandoned and mistreated by human smugglers. The toddlers are from Ecuador and are sisters

The camera operator alerted Santa Teresa agents and directed them to the remote location of where the toddlers were left.

The three-year-old lands on an uneven surface; laying motionless and facedown before struggling to stand up.  The five-year-old has her feet slip out from under her as she lands, her tailbone hits the ground. She struggles before getting up.

The children were provided first aid, and Border Patrol agents arranged transportation to a hospital.

“I’m appalled by the way these smugglers viciously dropped innocent children from a 14-foot border barrier last night. If not for the vigilance of our Agents using mobile technology, these two tender-aged siblings would have been exposed to the harsh elements of desert environment for hours,” stated El Paso Sector Chief Patrol Agent Gloria I. Chavez. “We are currently working with our law enforcement partners in Mexico and attempting to identify these ruthless human smugglers so as to hold them accountable to the fullest extent of the law.”