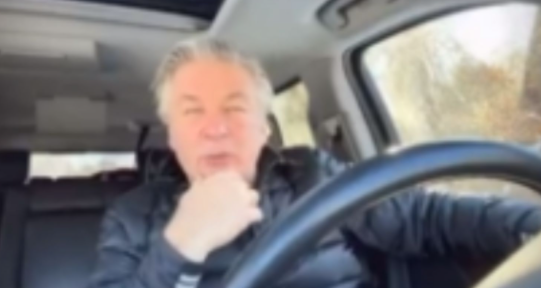 (The Post Millennial) – Actor Alec Baldwin posted Saturday on Instagram in what has been called a “bizarre rant” where he appears to deny any personal agency in an on-set accident which resulted in his shooting a cinematographer to death on Oct 21, 2021.

“The best way — the only way — we can honor the death of Halyna Hutchins [the cinematographer in question] is to find out the truth,” Baldwin starts out in the video.

Baldwin goes on to say that the “…organizations involved in this investigation do everything in their power to find out what really happened.”

He then continues, talking about “…right-wing rag sheets, and people who are all about hate.”

Baldwin concludes the video by saying “…but, setting aside the ‘January 6th of it all’, there it is.” At this point, he holds up a packet of Splenda to the camera, which was probably the same one he claimed someone handed to him days ago, with a note of encouragement on it.

Baldwin had previously said that he didn’t pull the trigger on the vintage Colt revolver. Also under investigation is how live rounds found their way into a gun on a movie set in this case.

Writer and journalist Jack Posobiec shared the video on his own Twitter account, also noting below it in a separate tweet, “He also claims he is complying with the investigation while obviously recording the video on his phone that the sheriff has ordered him to turn over.”

Authorities have subpoenaed Baldwin’s cell phone, and he even states in the video that his team is in the process of complying, but haven’t turned the phone in yet.

While Bladwin says that “…any suggestion that … my lawyers and myself, are not complying, that’s a lie,” he then goes on to iterate that “…as soon as we go through this process, we will comply.”