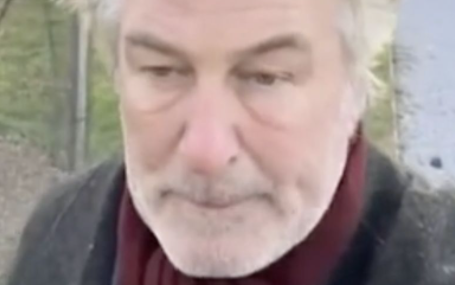 Ahead of the Christmas holiday, actor Alec Baldwin posted a video thanking his supporters for kind messages after he fatally shot cinematographer Halyna Hutchins and injured director Joel Souza in an accident.
“I wanted to take a moment to say thank you to all of the people who sent me such kind words and, you know, best wishes, and strength, and hope, and prayers, and so forth and thoughts, and lots of encouragement and lots of really, really good sentiments from so many people,” said Baldwin.

Baldwin said he received emails from friends, family, and other supporters “to send me strength, and good wishes, and so forth. And I’m very grateful for that.”
Baldwin also thanked those online who have been posting encouraging comments “and saying very, very supportive thing about this difficult situation.”
“I’m looking forward to the, you know, some aspects of this being behind me. Of course, for everybody, for everyone who’s involved in this it’s never going to be behind us because somebody died so tragically,” said Baldwin. “Not a day goes by I don’t think about that.”
Baldwin stated that he’s home with his family, and “just moving forward with my life.”
He continued on to reiterate his thanks, finishing off his video with an urge for people to wear masks and get their booster shots.
In late October, Baldwin accidentally shot Hutchins and Souza on the set of Rust, killing Hutchins. She leaves behind a husband and a young son.
Baldwin has asserted that he didn’t pull the trigger on that day, stating in an exclusive interview with George Stephanopolouas that he did not pull it.
“Well, the trigger wasn’t pulled,” Baldwin said, “I didn’t pull the trigger.”
“So you never pulled the trigger?” Stephanopolous asked.
“No, no,” Baldwin said. “I would never point a gun and pull that trigger at them. Never.”
“What did you think? How did a real bullet get on the set?” Stephanopolous asked.
“I have no idea. Someone put a live bullet in a gun. A bullet that wasn’t even supposed to be on the property,” Baldwin said.