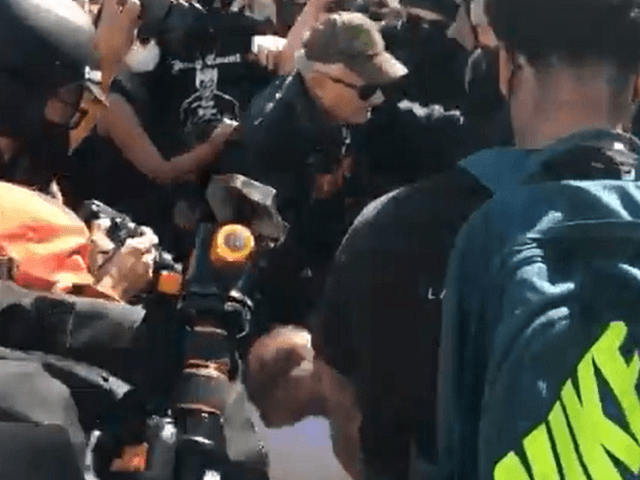 (Breitbart) – Antifa counter-protesters attempting to block people from attending a Free Speech Rally and Protest in San Francisco shoved a senior citizen to the ground and attacked another. The incident occurred in about the same location where an Antifa activist punched a black man in the face while others shouted racial slurs.

Saturday’s Free Speech Rally and Protest in San Francisco drew a large and angry crowd of Antifa counter-protesters. Rally organizer Philip Andrews tweeted a video showing the large group shoving an elderly man to the ground while surrounding him and another elderly man attempting to enter the rally.

Antifa attacked 2 senior citizens that were trying to enter our rally. After knocking one of the elders to the ground, Antifa continued attacking everyone who tried to enter my free speech rally. They still can’t explain why they committed countless hate crimes. Real NAZIS https://t.co/7QfRp0dKkO

The incident occurred at about the same time the crowd attacked Anderson. One man, dressed in black, blindsided Anderson and punched him in the side of his face, Breitbart News reported. The man came back a few seconds later — punching him in the mouth knocking out his two front teeth.

Anderson’s group, Team Save America, attempted to hold the rally but the crowd became increasingly violent forcing police to escort the attendees to safety. Anderson had about a dozen protesters in attendance. The Antifa counter-protesters numbered several hundred, local reports indicate. Police eventually had to load the rally attendees into police vans and whisk them away.