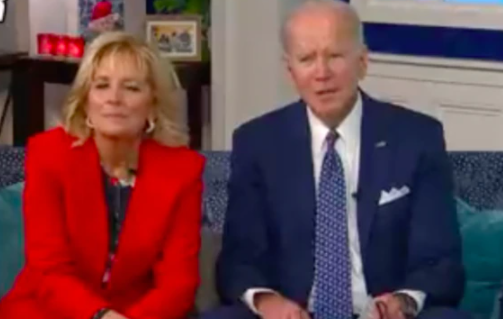 (Big League Politics) – President Joe Biden was tricked into saying “Let’s Go Brandon” during a NORAD Santa call-in event on Christmas Eve, with a caller sneaking the infamous phrase into a live televised call with the President.

The NORAD tracking of Santa is an annual US government tradition, with the Air Force using radar technology to “track” Santa Claus’ sleigh as it arrives to America to deliver presents to the nation’s youth. A caller named “Jared” got onto a phone line with President Biden, wishing the Democrat a Merry Christmas before slipping in the line.

Jill Biden laughed briefly at the phrase, with President Biden quickly moving on.

Biden’s willingness to repeat the phrase may indicate that he isn’t even aware of its political connotations, although Biden did quickly change the subject, asking “Jared” if he was from Oregon.

The slogan has emerged across the nation as a flashpoint for Biden’s unpopularity and policy failures while in office, originating from a NASCAR race in which a reporter misidentified chants from a crowd expressing their distaste for the President.