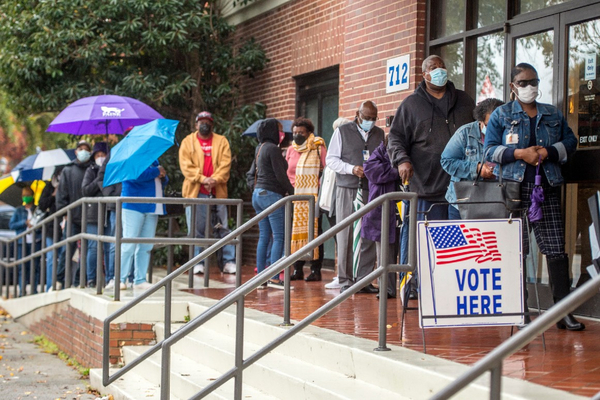 According to the shocking video, an election worker said they “were allowing anyone to come in” and access ballots regardless of their registration status.

“I’ll let you [Non-Citizen/Non-Registered Voter] fill out completely a ballot right now,” the poll worker tells the election worker in the video.

“Listen, we’ll let you do it. They’ll figure that out,” the election worker said, claiming that someone else down the line might nullify the fraud that she allowed in broad daylight.

The full video clip is below:

This is like the fraud playbook enacted in places like Detroit, MI, during the presidential election in 2020, which was exposed by Big League Politics #DetroitLeaks series, prompting a cease-and-desist letter from Dana Nessel, Michigan attorney general, in opposition to the 1st Amendment.

Big League Politics reported on the original reporting resulted in the Michigan secretary of state being forced to back down in court after poll worker trainers were caught dead to rights telling prospective workers to use COVID-19 mandates as an excuse to disenfranchise poll challengers:

“One day after vowing to fight a crucial voter integrity lawsuit in the courts, the Michigan attorney general’s office has conceded to demands that plaintiffs believe will clarify the role of poll challengers in the state.

The case was heard in the Michigan Court of Claims, which springs from shocking #DetroitLeaks revelations that show election workers cackling as their instructor explains how they will be able to use COVID-19 social distancing rules to disenfranchise poll challengers.

He explained that the secretary of state’s office would be sending out an explicit notice before Oct. 29 at 5 pm that makes clear the rights of poll challengers and watchers.

Gronda said that the new directive would be approximate to this: “Challengers and poll watchers have certain rights and responsibilities established by Michigan election law. Challengers and poll watchers are required to wear masks that cover the nose and mouth to the extent medically able to do so consistent with the MDHHS order and maintain social distancing while not performing their legal duties.”

“Challengers and poll watchers should maintain at least six feet of distance between themselves and election workers and voters as reasonably possible. However, to the extent that it is necessary to temporarily stand in closer proximity to election workers, to have a challenge heard, to observe the poll book, or perform any other legal duty, challengers and poll watchers are permitted to do so, provided close personal interaction is as brief as possible,” the new directive continues.

“Once a challenge or necessary observation is complete, challengers and poll watchers should resume remaining six feet away from voters and poll workers,” the directive concludes. Gronda noted that the state would be entering into a binding written agreement with the plaintiffs. “