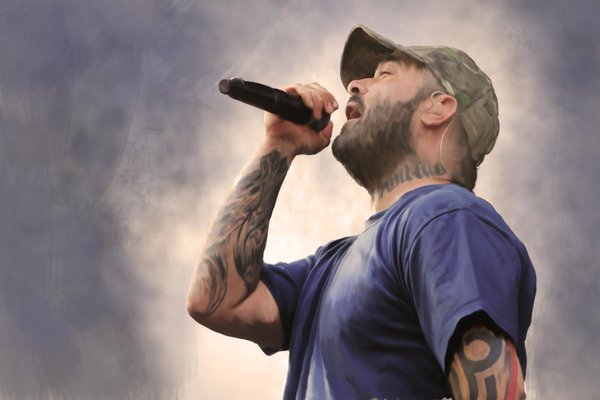 Rockstar Aaron Lewis, who melted snowflakes with his anti-leftist message in his latest song, led a “F**k Joe Biden” chant during a concert.

The former Staind frontman led the audience in an “F**k Joe Biden” chant to pulsing drumbeats during his concert at The Pavilion at Montage Mountain in Scranton this past Saturday as videos posted by fans showed. The singer was wearing a shirt that read, “I could shit a better president.” Lewis previously wore shirts with the message “F**k Biden” and “Impeach Biden,” according to Newsweek.

The “F**k Joe Biden” chant has made its way across America during college football games. As Outkick reported earlier this month, the chants have moved from football stadiums and into baseball games:

Fans chanting “F**k Joe Biden” at stadiums from Tennessee to Alabama to Oxford, Mississippi is quickly becoming the battle cry for football fans across the country as the citizens of this country continue to show disobedience to the great Emporer and his presidency.

The big news this week with the “F**k Joe Biden” chant movement is that it has spread from college football and into the baseball community, where New Yorkers chanted “F**k Joe Biden” during Fox Sports weekend coverage of the Subway Series. Fans could be heard sending a message to Biden as ARod, and Big Papi dissected the Yankees-Mets game.

Aaron Lewis was celebrated in conservative crowds after releasing his country single “Am I the Only One.”

The ballad that scolded singer Bruce Springsteen as well as left-wing activists for toppling statues around the country.

For my love of the red and white / And the blue, burnin’ on the ground

Another statue comin’ down / In a town near you

“This middle class, right wing wanker has recorded a song that should have been played at CPAC, in between speeches by nitwits like Lauren Boebert saying to refuse the ‘Fauci ouchie,'” lamented Lefsetz.

Aaron Lewis and I have political disagreements. But there are also things we agree on. I think that’s the foundation for the idea of our country. It doesn’t work if we’re so divided that we can’t reach across the aisle, have a conversation or an argument, and ultimately, shake hands. If we can’t do that, and this moment is so divisive, we may never get our country back.

Lewis blasted the Democratic Party as responsible for “every racist law, every scar on America.”

“So, I’d like to point something out that is very obvious, yet no one seems to bring it up or talk about it, that every racist law that’s ever been put into place, every scar on America was the Democrats. All of it,” he said. “It’s there if you go and look.”