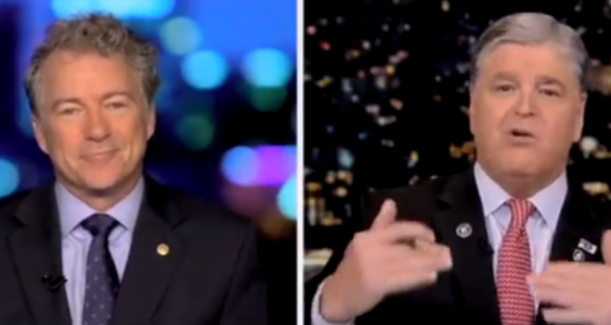 “Let’s not live in fear because Dr. Fauci is promulgating things that are unscientific just to scare you. If you’ve been vaccinated or if you’ve had the disease, live your life and ignore this man and let’s hope he can be gone as soon as possible,” he said.

“Virtually none of the edicts or the promulgations that come from Fauci’s mouth are based in science at all,” Paul told Hannity. “Take the idea that we’re now going to test the day of travel. The rapid test is accurate about between 30 and 50 percent if you don’t have symptoms. Most people traveling, if they know they’re sick, are going to not travel. So, most of the people we’re talking about are traveling are without symptoms. The test is 30 to 50 percent accurate.”

Paul noted that the new Omicron variant of COVID-19 is already across the United States and across the world. “No travel ban is going to stop it, and no amount of testing is going to stop it,” Paul said. Ahead of its spread, Fauci had also said last Saturday he “would not be surprised” if the new variant is already in the US, predicting it “almost invariably is ultimately going to go, essentially, all over.”

“But think about this: Fauci now says, ‘If you know someone’s been vaccinated, you don’t have to wear a mask next to him.’ So, you see him at one of these glittering Hollywood parties the other day, and it’s like, oh, if I don’t know the person, I put a mask on, if I know them,” Paul continued.

“But here’s the bottom line: people have been vaccinated, or people who’ve gotten the disease naturally, do have a semblance of protection and should feel comfortable going about their daily lives,” Paul stated in the on-air interview.