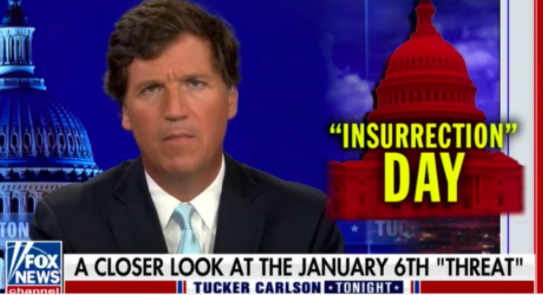 (The Post Millennial) – On the one year anniversary of the January 6 riot at the US Capitol, Fox News host Tucker Carlson exposed the fraud behind the Democrats’ and mainstream media’s theatrics that are being used to weaponize that unprecedented day.

“If you take three steps back as historical events go, January 6 barely rates as a footnote. Not a lot happened that day,” Tucker Carlson said.

“The Presidential Election was not overturned. The Capitol was not destroyed. The government was never toppled, no matter what you may have heard. Not a single elected official was injured,” Carlson explained. “Police got shoved, unfortunately. Punches were thrown. But the only person who wound up dead from violence was an unarmed protester who was shot to death without warning by a cop. None of the so called ‘insurrectionists’ had guns.”

“When was the last time you saw an insurrection like that?” Carlson asked.

“Looking back you can probably call what happened on January 6 a riot. Maybe. Just barely. So the question is why are we still talking about this? Why are our leaders obsessing over this event?” Carlson asked. “For every single one of the last 365 days the propaganda machine has been jamming up noise about January 6 at a deafening level. In fact, after all this time, the yelling is getting louder, and wilder, and still more disconnected from reality.”

“Why are they doing this?” Carlson asked.

“Everyone agrees January 6 was ugly but was it really a greater threat to America than say, inflation? Than opening the southern border and admitting 2 million people whose identities we can’t confirm? Yeah,” the Fox News host questioned. “They tell us January 6 was scary. Reporters were very afraid. But is it scarier than what’s going on at upscale shopping malls in Atlanta where people are getting shot to death in the parking lot? Probably not. And yet protesters that walked through the Capitol that day are still in jail tonight, a year later.”

“So it’s a tough sell telling normal people that this is a world historic event,” Carlson said.

The Fox News host proceeded to slam Vice President Kamala Harris and the speech she gave comparing the events that occurred on January 6 to the 9/11 terrorist attacks and the bombing of Pearl Harbor.

“It’s so ridiculous we’re not even going to bother to deconstruct it. It’s self-discrediting, as if Kamala Harris could be further discredited,” Carlson said.

In addition to slamming Vice President Harris, Carlson threw vitriol at President Biden who said in a separate speech that January 6 was worse than the American Civil War.

“That would be the war that killed more than one million people,” Carlson fired back.