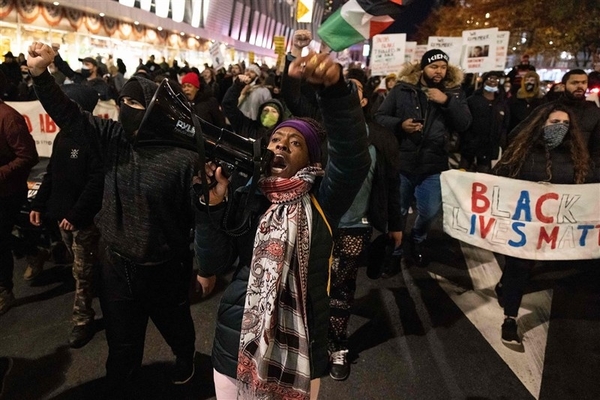 Anti-Rittenhouse protesters rioted in Portland, Oregon, and New York; they shut down the Brooklyn Bridge. All following the not guilty verdict on Friday.

In Portland, the protest was declared a riot after a group of people rammed through a gate at the Multnomah County Detention Center, and a vehicle was attacked while parked on the street.

The crowd of nearly 24 people chanted “burn it down” while breaking down the detention center gate, according to Sheriff’s Office officials.

An estimated 10 to 20 protesters entered and began moving down the ramp in the direction of the jail entrance and the building’s critical infrastructure. Individuals also placed large tree branches to prevent the gate from closing. Deputies met the trespassers on the ramp to prevent entry and began instructing them to exit.

The crowd, which was described as hostile, launched urine, alcoholic beverages, water bottles and batteries at deputies during the event. Because a large group of people were engaging in tumultuous and violent conduct, and further entry into the building would have posed significant implications and grave risk of causing public alarm, the Multnomah County Sheriff’s Office (MCSO) declared a riot.

Even as deputies instructed people to leave, deputies continued to take projectiles and were subjected to hostile behavior. Demonstrators then stood at the garage exit, repeatedly preventing the gate from closing by pushing on it. Again, deputies asked the crowd to step away. Demonstrators ignored the repeated requests and continued blocking the gate. Deputies swiftly moved toward the demonstrators that were preventing the gate from closing to allow space for the gate to close properly. Deputies retreated inside and eventually were able to re-secure the gate. No arrests were made.

Eventually, the crowd dispersed from the jail and moved to area businesses. The rioters smashed business windows and a police vehicle window.

Meanwhile, In New York City, the Brooklyn Bridge was shut down by protesters; they marched in opposition to the not guilty decision of all five charges from the Wisconsin jury.

Scott Heins, an independent journalist, tweeted a video showing the crowd marching on the bridge.