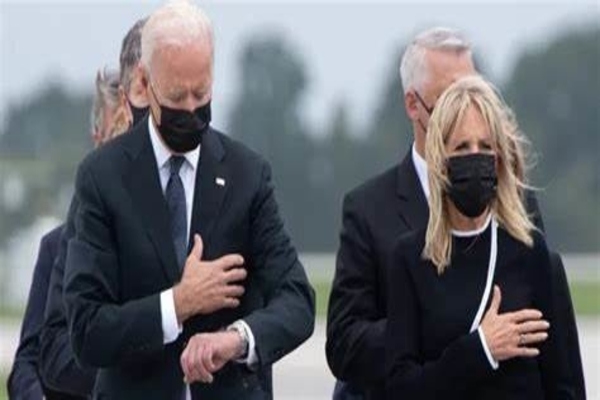 The mother of a fallen U.S. Marine, Shana Chapell, blasted President Biden on social media after meeting at the dignified transfer ceremony in Dover.

Chappell is the mother of Marine Corps Lance Cpl. Kareem N. Nikoui of Corco, CA, age 20 – one of the 13 U.S. service members who died after terrorists bombed the airport in Kabul during Biden’s chaotic exit from Afghanistan.

She recalled meeting with Biden at the Dover Airport for the dignified transfer ceremony, where he tried to reminisce about his son Beau Biden who died of cancer.

“[Y]ou tried to interrupt me and give me your own sob story and i had to tell you ‘that this isn’t about you so don’t make it about you!!!’” Chappell wrote.

Biden grew frustrated as she continued to talk to him, Chappell also wrote.

“U then rolled your fucking eyes in your head like you were annoyed with me and i let you know that the only reason i was talking to you was out of respect for my son…” she wrote. .

She continued saying Biden threw up his hand after turning to walk away, while she was speaking.

“U turned to walk away and i let you know my sons blood was on your hands and you threw your hand up behind you as you walked away from me like you were saying ‘ok whatever!!!’” she wrote.

“What the fuck was so important that you had to keep looking at your watch????” she asked. “You are nobody special Biden!!! America Hates you!!!!!”

Chappell’s Instagram account was suspended but after Breitbart News highlighted the latest example of the company’s censorship, it was restored.

“We express our deepest condolences to Ms. Chappell and her family,” said the Instagram spokeswoman. “Her tribute to her heroic son does not violate any of our policies. While the post was not removed, her account was incorrectly deleted, and we have since restored it.”