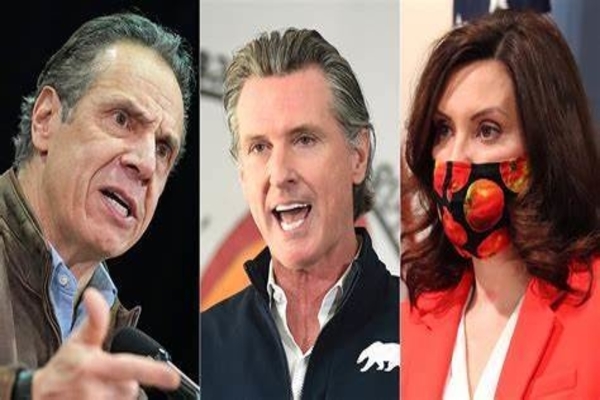 Along with the resignation of Andrew Cuomo (D-NY), Democrat Governors across the nation are facing their own problems.

Gov. Gavin Newsom (D-CA) is on the ballot for a recall, with five weeks before the vote, polls signal a potentially close race. Gov. Gretchen Whitmer (D-MI) faces her corruption problems.

Suppose the second-ever recall election of a California Governor succeeds. In that case, a likely avalanche of national problems for Democratic Governors races later this year in Virginia and New Jersey as Republicans could pick up on the opportunity.

For instance, as Evers announced his re-election in June, in a press release, the Republican Governors Association (RGA) highlighted how Evers “had a tough run out of the gate” as indicated “when members of his party struggled to muster up excitement and support for his reelection.”

Republicans are excited over the possibility of Newsom’s recall and a shot at Whitmer in Michigan, especially after the crash of New York Gov. Cuomo. All three Democrat governors pushed masks and lockdowns while pushing the leftist narrative that the Democrats have been more compassionate and responsible than former President Trump or governors like DeSantis (R-FL) and Abbott (R-TX).

Cuomo’s fall comes while the virus is spreading, and the return of mask mandates and restrictions lead to the leftist push for vaccine mandates.

But the resurgence of the virus represents a failure of Democrats to contain the pandemic once and for all as they had promised during last year’s election and as Biden took office. Their narrative seemed to be playing out – it appeared to be happening – in the spring as the CDC lifted mask guidance for vaccinated individuals.

Axios reported that polling data is shifting against Biden and Democrats on the virus, stating that the handling of the virus is now a “liability” among the public. When combined with other indicators, like rising inflation, a border crisis, and more, the Axios report said the edge belongs to Republicans going into the midterms.

Cuomo has fallen because of the sexual harassment claims from several women. But the questionable nursing home order has been a long and severe problem for him, with Democrats and Republicans in New York wanting answers and accountability.

Both Newsom and Whitmer have similar pandemic failures; however, neither face any allegations of sexual misconduct.

The nursing home issue began to attract attention last year after a policy instituted by Cuomo prohibited nursing homes from turning away patients who had been treated for coronavirus as cases were surging in his state. Critics claimed nursing home residents death increased. Last August, the Department of Justice (DOJ) began an inquiry. It was found the Cuomo administration knowingly concealed data about the death toll of nursing home residents, partly from fear of federal scrutiny and the scandal. According to a New York Times timeline, it remains under investigation by the FBI.

“Just on the nursing home question alone, there are more than half a million pages of documentation,” Lavine said of his committee’s investigation, which Cuomo likely has now skirted by resigning before the committee can continue its impeachment pursuit.

In Michigan, Whitmer issued a similar directive to her state’s nursing homes. Self-reported data shows more than 5,600 deaths of “long-term care” facility residents in Michigan. Still, the governor’s policy and data collection methods, like Cuomo’s, have been sharply criticized and led to questioning the DOJ.

The conservative research group Michigan Rising Action described Whitmer as the “Cuomo of the Midwest” and said Cuomo’s resignation “should serve as a warning” to Whitmer.

“Governor Whitmer followed in Governor Cuomo’s footsteps by placing Covid positive patients into nursing home facilities — and both attempted to cover up the deadly policy by hiding the data on nursing home deaths,” the group’s executive director, Eric Ventimiglia, said in a statement to Breitbart News. “The parallels between Andrew Cuomo and Gretchen ‘Cuomo of the Midwest’ Whitmer are striking,” he continued, adding Cuomo’s resignation “should serve as a warning to Whitmer that no matter how hard she tries, she will not be able to avoid accountability for her deadly and misguided policies.”

In California, Newsom implemented the first statewide stay-at-home coronavirus mandate. He was caught violating his own orders in November.

The recall effort against Newsom that began in February 2020 over issues such as the state’s high homeless population and his failure to “enforce immigration law” picked up steam.

Whitmer has time to repair her reputation. Newsom’s recall election is approaching, and the prospects of serving appear to be faltering. The most recent poll from Emerson College revealed 46 percent favoring the recall versus 48 percent against it, which is within the poll’s three percent margin of error.

Newsom warned of the national impacts of his possible recall in July with McClatchy’s California editorial boards. “If this was a successful recall, I think it would have profound consequences nationwide and go to not just politics, but to policy and policymaking,” he said. He contended Republicans would be “advantaged” in 2022 if they could “gin folks up” and recall him in 2021.

Newsom is correct: His recall election and whether he survives – or how close the race is – very well could send waves across America. It would be the first indicator of whether Cuomo’s demise was a lone Democrat failure or the beginning of Democrats facing votes due to their job performance. Watch for the broader narrative to be championed by Republicans as the Democrat failures on coronavirus nationwide are evidence of the RGA’s early attack on Evers in Wisconsin.

“We imagine this might be the case for most Democrat governors that mismanaged COVID response, killed jobs, and put the most vulnerable lives at risk,” the RGA said.