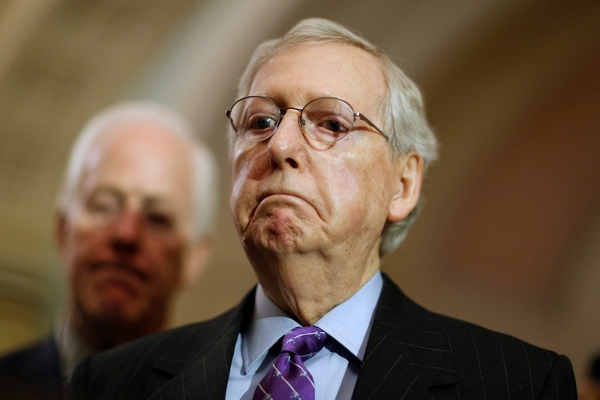 Sen. Mitch McConnell (R-KY) is ordering Americans to take the COVID vaccine, or he will shut down public life alongside the Democrats if they do not comply.

McConnell issued these threats as Americans resist the massive push for the COVID-19 vaccination.

“These shots need to get in everybody’s arms as rapidly as possible, or we´re going to be back in a situation in the fall that we don’t yearn for — that we went through last year,” McConnell said on Tuesday.

“It never occurred to me that there would be difficulty getting Americans to get the shot,” he said.

Big League Politics has reported on the total failure of the conservative movement to protect health freedom, with popular Fox News hosts and the CEO of Newsmax falling in line to adhere to Biden’s medical tyranny:

“As the experimental COVID-19 vaccine regime falters, with people who have been vaxxed regularly contracting the virus, the shills are out in full force, and that includes the faux-conservatives at Fox News as well.

“Fox & Friends” hosts Steve Doocy and Brian Kilmeade mongered fear on behalf of the Big Pharma vaccine regime. They blamed the unvaccinated for the spike in cases, which has become a popular talking point despite not being backed up by the facts.

“Well, here’s the thing. And one of the CDC officials said yesterday, the pandemic right now is really just with people who have not been vaccinated,” Doocy said as Kilmeade chimed in by saying: “Thank you.”

Doocy defended Biden’s policies regarding Facebook. He demanded more censorship from Facebook of all information not approved by Big Pharma.

“Unfortunately, and this is one of the reasons apparently that Joe Biden and the administration came out last week, the administration very frustrated. They have not been able to get Facebook to get rid of some of the disinformation,” Doocy said. “The disinformation is online. The vaccine is killing lots and lots of people. Or it changes your D.N.A. Or their little microchips. None of that is true.”

The Republican establishment has sold out the American people.