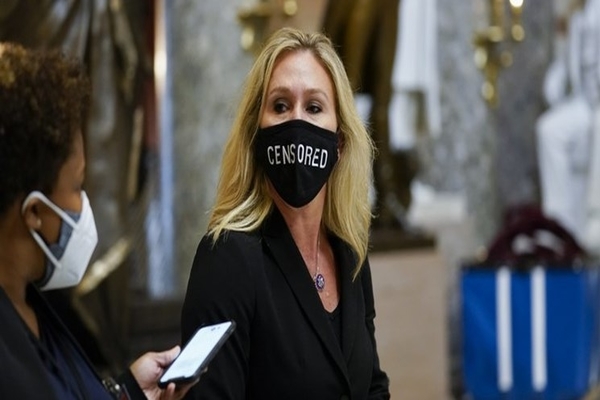 Rep. Marjorie Taylor Greene (R-GA) has again been suspended from Twitter; they claim she posted “misleading information” relating to the pandemic. Twitter describes the temporary suspension against Greene as several “Mistakes.”

Twitter suspended Rep. Marjorie Taylor Greene this week to violate its policy against posting “misleading information” related to the coronavirus pandemic reported by the New York Post. A spokesperson from Twitter confirmed to the Post that Greene’s personal account would be placed in “read-only mode” for 12 hours. Likely, her previous posts can be read; she is unable to make any new posts. The suspension should be lifted Tuesday morning.

Twitter unveiled the policy in March; it states that 12-hour suspensions will be issued to users that violate the misinformation policy on more than two or three occasions. A fourth violation brings a week’s suspension, and the fifth could lead to a permanent ban of the account.

Twitter flagged two of Taylor Greene’s tweets regarding coronavirus vaccines. The first responded to a post from Dr. David Samadi regarding hospitalizations from coronavirus in the United Kingdom.

“In the United Kingdom, 47% of new COVID-19 cases are vaccinated people,” Samadi tweeted, to which Greene responded: “This is why no entity should force NON-FDA approved vaccines or masks. Instead help people protect their health by defeating obesity, which will protect them from covid [sic] complications & death, and many other health problems. We should invest in health, not human experimentation.”

The second flagged tweet by Taylor Greene stated: “The controversial #COVID19 vaccines should not be forced on our military for a virus that is not dangerous for non-obese people and those under 65. “With 6,000 vax related deaths and many concerning side effects reported, the vax should be a choice not a mandate for everyone,” Greene added.

Both of Taylor Green’s tweets were flagged as “misleading,” and a link was provided to inform users about the safety of the vaccines. Greene has been suspended from Twitter on many occasions for various reasons, as Breitbart News reported in January:

Some of her tweets coming from a thread about election integrity surrounding Georgia’s elections earned labels from Twitter, claiming, “This claim about election fraud is disputed, and this Tweet can’t be replied to, retweeted, or liked due to a risk of violence.”

Back in March, Twitter suspended Taylor Greene due to an “error” on the same day the Democrats set in motion the effort to expel her from the House of Representatives, as reported by Breitbart News:

The Silicon Valley tech giant previously suspended the congresswoman’s account in January after she discussed allegations of fraud in the 2020 election.

This time, Twitter says the suspension was an error.

Responding to the incident, Rep. Greene called on Twitter CEO Jack Dorsey to identify the employee at Twitter who made the error.

“I was just told Twitter suspended me for 12 hrs in ‘error,’ on the same day Dems introduced a resolution to expel me from Congress,” said Rep. Greene ” What a coincidence?”

“Twitter’s little error wasn’t resolved until after 12 hrs. @Jack which employee made the ‘error’? Reply to my email, Jack.”

In April, her account was suspended “accidentally” for the second time by Twitter, as reported by Breitbart News:

Rep. Marjorie Taylor Greene (R-GA) was locked out of her Twitter account for a second time over the Easter holiday, in what the company says was an error. This is the second time Rep. Greene’s account has been “accidentally” locked by the Silicon Valley tech giant.

The lockout occurred shortly after Rep. Greene posted a celebratory Easter message to her followers on the platform.

“After tweeting, “He is risen! Happy Easter!” I was suspended this morning for 12 hours!” said Rep. Greene. “Was it my Christian faith? My never ending demand to an end to murdering God’s creation in the womb? Is it my fight to protect our greatest right to defend ourselves, come and take them? My willingness to Fire Fauci? Maybe my fight to stop mandated vaccine passports? Or how about calling out Ilhan Omar?”